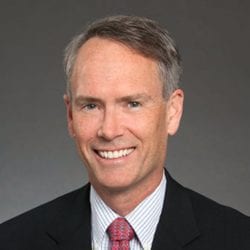 PHOENIX, Ariz.—Feb. 10, 2017— The Great Hearts Board of Directors announces the appointment of Wade Dyke, D.Phil., as Chief Executive Officer of Great Hearts, the largest classical charter school network in the country.

In his capacity as CEO, Dyke will oversee the continued success and growth of the charter management organization and its high-performing network of academies in Arizona and Texas. He will report to the Great Hearts America Board of Directors, who selected him after an extensive national search.

“Dr. Dyke’s professional and academic background is ideally suited to the classical and outward-looking mission of Great Hearts. Wade also has demonstrated ability to lead growing organizations to still higher achievements,” said Jay Heiler, Great Hearts board chairman. “He will lead Great Hearts to the next level as a scalable, broadly appealing model of classical education for the 21st Century.”

Dyke had a highly successful tenure at Kaplan, where he spent nine years across several jobs of ascending executive responsibility, including as Executive Vice President of Higher and Professional Education. While at Kaplan, he was known for his ability to lead initiatives that built upon the innovation and quality of the operations and the experience of its 50,000+ students. He also served as the chief executive officer at Chancellor Beacon Academies, Inc., now Imagine Schools, which creates and operates charter schools nationwide.

Prior to that, Dyke held federal and state government posts where he helped advance policies designed to encourage innovation in education. He served as the chief of staff to the deputy secretary of the U.S. Department of Education and previously as an assistant professor of public administration at The Ohio State University.

“I am delighted to join Great Hearts and look forward to working with this talented and dedicated team to bring this transformative educational experience to even more families,” Dyke said.

About Great Hearts:
Great Hearts is a non-profit network of public charter schools dedicated to improving education nationwide through classical, preparatory, K-12 academies. As the largest provider of classical education in the country, Great Hearts academies serve more than 14,000 students at 28 public schools in greater Phoenix, Ariz. and San Antonio and Irving, Tex., with waitlists that typically exceed enrollment. Great Hearts provides a robust liberal arts curriculum incorporating advanced math and science, a focus on the arts and foreign language, and a range of extra-curricular activities and athletics. Learn more at www.greatheartsamerica.org.