What a difference a state makes: The future of charter schools in California vs. Arizona

While Governor Gavin Newsom and the Democrat-supermajority in the Legislature effectively eliminated most charter-school expansion in California, the charter school landscape is much different in neighboring Arizona.

When Governor Newsom signed the anti-charter-school-expansion bill into law last year, his office said that new charter schools will likely not open in financially troubled school districts, despite students in those districts often being in the greatest need of better educational alternatives such as charter schools.

In contrast, in his 2020 State of the State address, Arizona Governor Doug Ducey bluntly asked what was the advantage of forcing parents to send a child in a low-income area to a failing regular public school “and that being their only choice.”

I visited Vista College Prep on a trip to Arizona earlier this month and was just as impressed with the school as Governor Ducey has been.

The charter school has an overwhelming minority-student population and 96 percent come from low-income families.

The school’s students excel in academics, especially in the STEM subjects.

On the state math test, nearly two-thirds of Vista students scored at the proficient level, while more than three-quarters scored proficient on the science test.  These rates were way above the state average in each subject.

The school’s formula for success includes: a strong emphasis on literacy education, an extended day, using data to drive teaching and individualized instruction, a structured and supportive school culture, and strong partnership with families.

Parents and their children love the school.  One Vista parent says: “Best school my kids have ever attended.  They thrive and look forward to learning every day.” 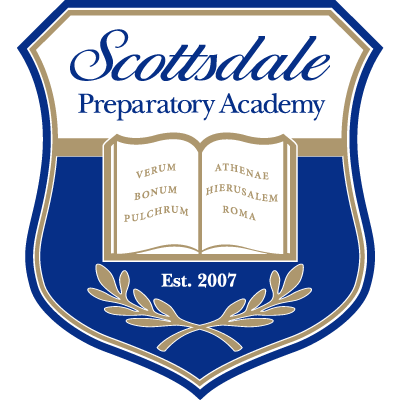 Last year I also visited Scottsdale Preparatory Academy, a 6th-12th-grade charter school, which is part of the Great Hearts charter-school network in the Phoenix area.

Scottsdale Prep uses a classical-education model, and Headmaster Alison Chaney says that the Great Hearts schools “believe in each student’s innate potential to comprehend the rich tradition of Western Civilization to which he/she is heir and to grow in the virtues that mark a profound, philosophical life summarized by the triad of our Latin motto: verum, pulchrum, bonum—truth, beauty and goodness.”

Ms. Chaney gave me a tour of Scottsdale Prep and I was able to see classes in action.  In addition to various math and literature classes, students take five years of Latin, courses in history and humane letters from Ancient Greece to medieval times to Modern Europe and the American Tradition, and music and poetry.

Even more than simple academic indicators, Scottsdale Prep seeks to cultivate a spirit of civic service among its students.

Ms. Chaney quotes the Athenian Oath taken by the young men of ancient Athens upon reaching the age of seventeen: “We will strive to quicken the public’s sense of civic duty.  Thus in all these ways we will transmit this City, not only, not less, but greater and more beautiful than it was transmitted to us.”

In Arizona, unlike in California, the state’s leaders embrace the success fostered by charter schools and school choice generally.

In a communication with Pacific Research Institute, Governor Ducey said:  “In Arizona, we know that school choice is about kids and families.  From more than 25 years of charter school success to public school open enrollment and much more, promoting choice has led to better results across our education system — including at district, public charter and private schools. Arizona will continue to strengthen our school choice environment to ensure students and families have access to the education that best fits their unique needs.”

California’s leaders have a lot to learn from its Arizona neighbor.

Lance Izumi is senior director of the Center for Education at the Pacific Research Institute.  He is the author of the 2019 book Choosing Diversity: How Charter Schools Promote Diverse Learning Models and Meet the Diverse Needs of Parents and Children.