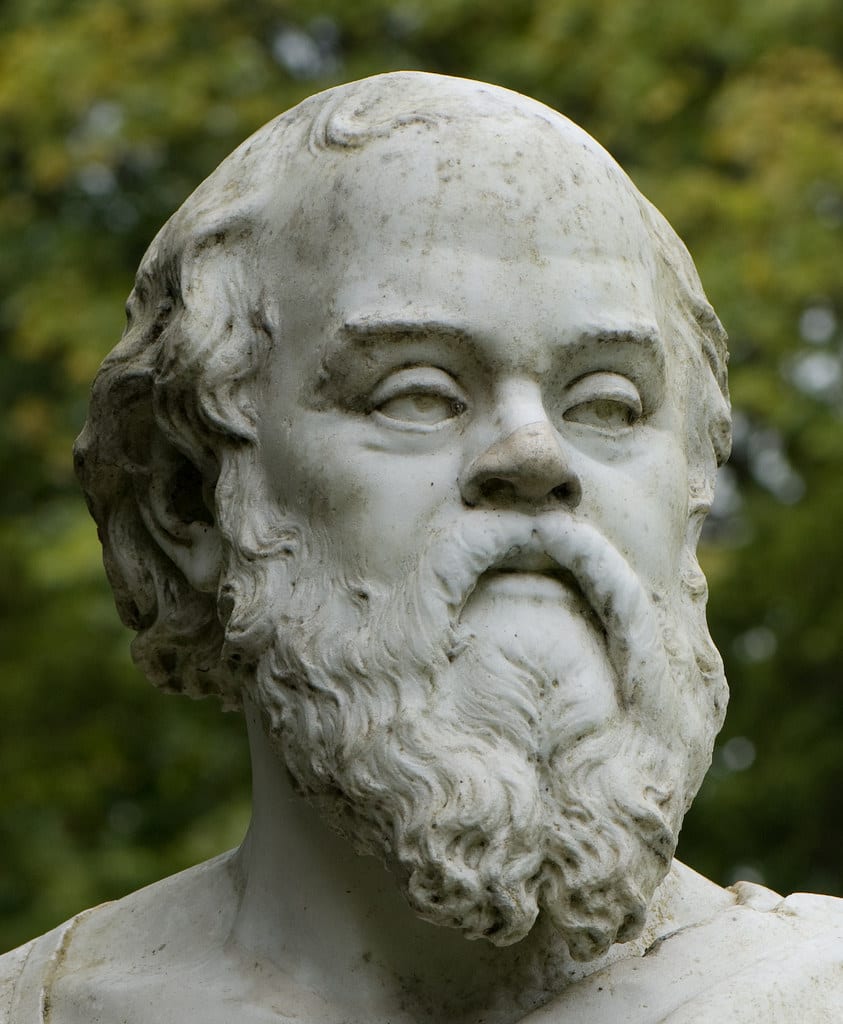 Socrates was a classical Greek (Athenian) philosopher credited as one of the founders of Western philosophy.

“The Socratic method is based on the example of one of the greatest teachers who ever lived, the 5th Century B.C. Athenian teacher, Socrates,” explained Great Hearts Co-Founder, Dan Scoggin.

Plato writes about his mentor Socrates, recording conversations he holds with other supposedly wise men of Ancient Athens. Socrates was an unconventional philosopher of his time.  Compared to the way his contemporaries defended arguments at all costs, Socrates leads rigorous dialogues in quest of the truth.

He strives to take different premises his interlocutor accepts and civilly demonstrates how they contradict each other. This way, the statement that his partner had originally made can be refined based on the new discovery the two of them had found. It leaves the interlocutors with an answer by negation—but with just as many questions as they started the discussion with. This leads them to strive to keep exploring in order to find a firm foundation of understanding.

The teacher using this method engages the student by asking questions that provoke deep reflection that often raises other questions. By asking questions of the class, the teacher helps students to form the habit of asking questions, of wondering about a topic for himself or herself. There is no substitute for genuine wonder as a motivator for self-directed learning: in Plato’s Meno, Socrates says that his ability to provoke befuddlement and wonder in others is one of his most effective techniques. Socrates says elsewhere that “wisdom begins in wonder.”

In this way, the Socratic method is the best companion for the Great Books—and all the subjects we seek to master at Great Hearts. The Socratic method allows us to get to the underlying truths of the texts we read and concepts we strive to understand without being misled by our own opinions and beliefs. Students evaluate every statement they make and use each other’s arguments to arrive at new conclusions while discovering more questions. By applying the Socratic method to literature and philosophy, students can engage themselves with the material in a way that no textbook or system of memorization can provide.

Great Hearts Vice President of Faculty Development, Jerilyn Olson, explained the Socratic method as “a process of guiding students to an understanding of an idea or concept through carefully planned observations, narrative, and questions.”

But this kind of philosophical Socratic discussion, led by the teacher, also has an important place in other courses. While learning the grammar and vocabulary of Latin, it is natural to wonder about the limits and power of language, and to ask about how the Romans might view certain features of modern English grammar: there’s an opportunity for Socratic discussion. In math classes, a curious student invariably asks whether math is really true, or if it’s just a clever human invention.

More generally speaking, something like Socratic discussion happens whenever a teacher asks a question that provokes deeper thought, or answers a question with a question.  This is teaching by questioning, learning by discovery. It can be about grand philosophical questions or it can be about more simple matters of fact. At Great Hearts, Socratic moments begin in kindergarten and first grade and culminate in the upper high school grades when our scholars wrestle with the highest order questions of the human condition.

Olson added, “It works because it starts with a shared text or shared experience and drives inquiry through observation and carefully planned questions.  It builds capacity in students for problem solving and proof. It is a method that trusts in the existence of truth and the human ability to pursue truth.”

This style of learning is a dialogue between individuals, where our students ask and answer questions to stimulate critical thinking and draw out underlying presumptions.

The Socratic method is of course not unique to Great Hearts; it is a bulwark of classical learning; but Great Hearts is perhaps the institution most committed to deploying it in K-12 public education.

What a difference a state makes: The future of charter schools in California vs. Arizona

How to talk to your children about COVID-19