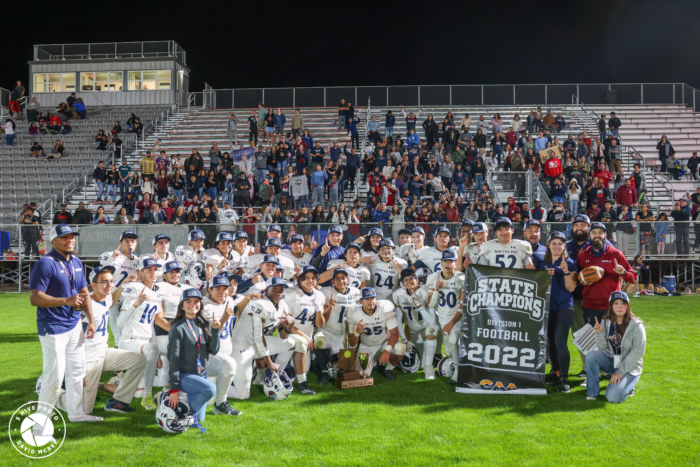 The Maryvale Prep Matadors are only in the second year of their tackle football program and have already brought home a CAA Division State Championship win.  The team was down 14-12 with 2:30 left in the 4th Quarter, only to come back and win with a game winning 29-yard field goal with three seconds to go.  The win came against the defending state champs, Skyline Prep. 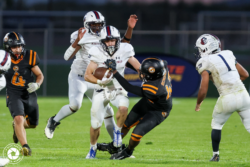 That winning field goal was made by senior Finn Comerford.  “As soon as it went through, I immediately had to go see my team and I could see in their eyes the joy that they all felt,” said Comerford.  “It felt great. It was worth all the summer conditioning, team practices, and individual practice.”

Jon Rickey, Great Hearts Arizona Network Director of Athletics, said he couldn’t be any more excited for their big win. “What a great moment for their school and a testament to their players, coaches, and athletic department and their hard work in and out of season preparing for that great moment,” said Rickey.  “I may have yelled a bit more than I should have when I saw that ball go through the uprights!”

Senior Angel Martinez Neri scored the second touchdown of the game.  “It meant that I was able to accomplish something great. With winning the championship, I have proof that I could do something challenging. So now in the future I know I am able to accomplish anything that I put my mind to.”

Nine of the 30 athletes on the team are seniors this year and have laid a great foundation through their play on the field and leadership off the field and in the classroom.  “This is a dream come true, movie-type ending for these seniors,” said Coach Tom Barringer.

Seniors Steven Duke and Benji Ruiz understand the scope of what a win like this means for the school.  “It means a lot to us and to the program. It’s just an amazing way to end my high school career, especially since I’ve only had two years of tackle football in high school,” said Duke.

Ruiz added, “It meant more than just being able to win a championship for the football program. It meant being able to prove to the rest of our athletics department that any sport here at Maryvale is able to compete with the most talented teams in our conference and we’re all able to accomplish anything we want to.”

“Since the end of last season, we knew this team was going to be special and had the potential to return to the championship game and come out victorious,” said Barringer.  “We have a very dedicated senior class with lots of talent across all positions. This senior class started as freshmen the year I took over the football program back when it was flag football and have stayed committed to the program throughout their 4 years. For the two years of our tackle program, they have gone 18-2 in games getting it done on the field.  They have gotten it done in the classroom as well with a combined unweighted GPA of 3.43. As coaches, we have always wanted this program to form good young men that represent their community well. When we win, Maryvale wins.” 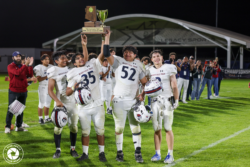 Celebrations continued the following week with a Fall Athletics Banquet where the championship team was recognized, and each member of the program received their championship ring in front of all the families and other fall athletes.  A “Matador Victory Walk” took place on campus where the team wore their jerseys and paraded the championship trophy through the halls, met with cheers from the entire K-12 student body and faculty.

“I think back to almost four years ago when Athletic Director Rich Galewski and I started talking about bringing tackle football to Maryvale Prep. Through his vision, a great hire in Head Coach and teacher Thomas Barringer, and the great commitment of the coaches, players, and families to both in and off-season training and conditioning, this State Championship in only their second year exceeded all expectations or dreams that we had that day four years ago,” said Rickey.  “It’s a great day to be a Matador!”