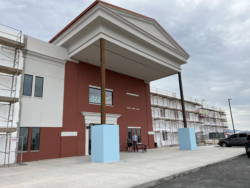 Today we celebrate the first day of school at the new additions to the prestigious Great Hearts network of classical liberal arts preparatory academies.  The first day of school traditionally invokes excitement and wonder.  Add the element of a new school and the atmosphere becomes pure magic in the eyes our scholars and their families.  After all the planning and preparation that goes into a new campus, academy leaders are pleased to finally welcome students and faculty through the doors.

You could see the awe and wonder on faces as children were dropped off for the first day of school at the new Great Hearts Roosevelt in Buckeye.  Some of the finishing touches are still being added to this new construction, but the classrooms and halls are ready and received the eager scholars and faculty this morning.  This is the first new campus in Arizona since 2014.  The large 25-acre grounds will boast a new architectural design emphasizing a more classical look with large roman columns once the exterior is complete.

“Buckeye is so dynamic right now,” Headmaster Stephen Philabaum says.  “It’s one of the fastest-growing cities in the country, and it’s a melting pot of people.  You have everyone from generational farmers, to those flocking here from out of state, to others who serve at Luke Air Force Base – people of all different stories and backgrounds are moving to this community.”

The Roosevelt Campus is named after Quentin Roosevelt, the youngest son of the 26th President of the United States, Theodore “Teddy” Roosevelt, and First Lady, Edith Roosevelt. The upper school’s mascot will be the Aces, a nod to Quentin’s career as a pursuit pilot during World War I, while the lower school will be known as the Aviators.

Texas is welcoming two new Great Hearts Academies this week as well.  Great Hearts Invictus in Helotes opened its doors for the first day of school this morning.  Headmaster Matthew Vlahovich greeted K-7 scholars to the academy as the new Invictus Highlanders.  Great Hearts Prairie View will kick off the school year tomorrow in Keller, Texas for K-3 students at a temporary campus.  Next year, under the leadership of Headmaster Ryan Mullins, the Prairie View Hawks will serve kindergarten through middle school and will move into their permanent home, just a few miles from their current location.

There are still seats available for each of these new academies but that is not expected to last long.  If you live in one of these areas and are considering a classical education at Great Hearts for your kid(s), you are encouraged to apply today to get in on the ground floor of these new academies.