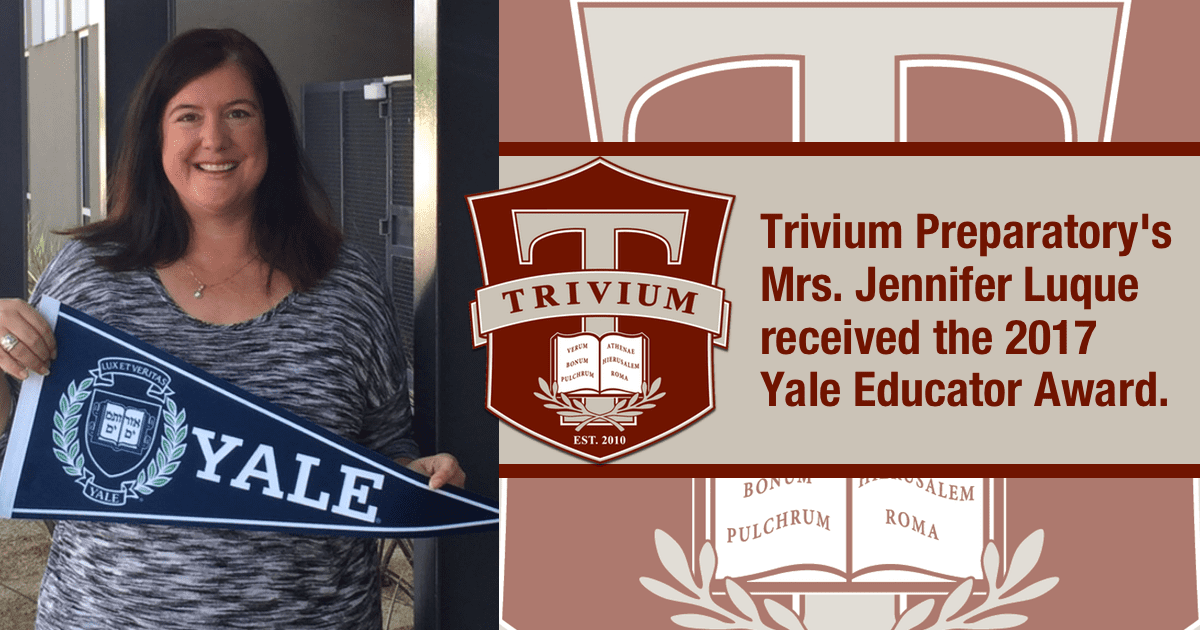 Phoenix, AZ — September 7, 2017— Mrs. Jennifer Luque of Trivium Preparatory Academy has been recognized by the Yale Office of Undergraduate Admissions as a recipient of the 2017 Yale Educator Award.

This award, sponsored by the Yale Office of Undergraduate Admissions, recognizes educators from around the world who inspire and support their students to perform at high levels and to achieve excellence. Of this year’s 411 nominees, who represent 42 US states and 24 countries, 58 teachers and 30 counselors were selected to receive the award. Matriculating students are invited to nominate high school educators, and a committee of Yale admissions officers reviews each nomination individually and designates recipients. In September, the winners were sent engraved desk sets and congratulatory letters, and administrators of the high schools were notified of their achievement.

Students entering the Yale Class of 2021 were asked to nominate outstanding educators who have deeply impacted their lives. “Mrs. Luque was nominated for the award by Jack Fresquez, ​then selected as a winner by a committee in the Office of Undergraduate Admissions,” stated Mark Dunn, Associate Director of Admissions. “As our committee reviewed nominations, we were constantly reminded of the unique and critical role that exceptional educators play in shaping their students’ futures by encouraging them to pursue their goals.”

About Yale:
Yale is a top research university with a unique emphasis on undergraduate liberal arts education. All 5,600 undergraduate students enroll in Yale College, which offers more than 80 majors and hundreds of opportunities to conduct groundbreaking research. Undergraduates at Yale come from all 50 states and more than 70 foreign countries. More than 15% of Yale students will be the first in their families to complete a four-year degree, and 43% are US Citizens or Permanent Residents who identify as members of a minority group. Yale offers admission to students without regard to their ability to pay, and meets 100% of every student’s financial need with an award that does not include loans. Currently 64% of Yale undergraduates receive financial assistance, and Yale budgets more than $140 million annually for need-based financial aid. The 1,580 members of the Yale Class of 2021 who began their first semester in August 2017 graduated from more than 1,100 different high schools, 63% of which are public schools.