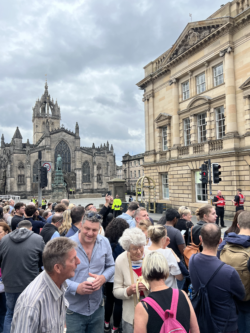 News of Queen Elizabeth II’s passing made headlines around the world in an instant. For Americans, you likely saw it in your social media feed, or perhaps you caught a headline as national news outlets broke into their daytime programming with the breaking news. But for one Great Hearts employee, she found herself caught in the middle of this historic world event.

Kathy Lund, Great Hearts Director of Business Systems, was visiting her daughter, a Glendale Prep graduate in Scotland, who received her master’s in Architectural Conservation from the University of Edinburgh. Lund and her family were doing some sightseeing of the country when news of the Queen’s passing broke.

The deep connection the people of Scotland had for the Queen was evident as both sadness and gratitude engulfed the country. “I experienced the overwhelming feelings of the love they have for the Queen in Scotland, and the gratitude they felt for her over 70 years of service,” recalled Lund.

The body of Queen Elizabeth passed through small Scottish towns on the way to Edinburgh before making the journey back to London.  When the Lund family returned to Edinburgh, they found many of the shops were closed to allow the public to attend the processional and pay their respects.  She said that they did not witness the processional personally but did see the crowds lined up over a mile deep to see the Queen pass by.  Out of respect to the people of Scotland, Lund said that she didn’t want to take a spot away from the locals who had a deep connection with the Queen. 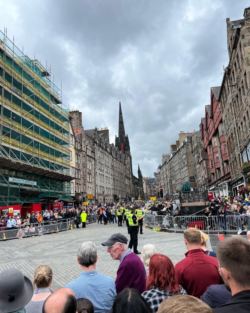 “I felt very honored to be there to experience this time in history,” said Lund.  “I actually felt very thankful that [her death] happened in Scotland for people of Scotland, because they had such a great regard for her. To be able to have the procession and all the things that went along with it, it was an honorable time to be there,” said Lund.

One road-side memorial she passed by bared the haunting words of the Queen, “Grief is the price we pay for love.”  This resonated with Lund as she recounted all the events that she experienced.  Events that will now be recorded in history books for generations to come.  Queen Elizabeth II was laid to rest earlier today alongside her late husband, Prince Philip, at the King George VI Memorial Chapel at Windsor Castle.