The Take19 Jazz Quartet started with one objective: to play twenty minutes of entry music for the Chandler Preparatory Academy awards assembly at the end of their sophomore year. Eighteen months later and after weekly Sunday afternoon rehearsals, the quartet entered the professional recording studio at Grand Canyon University.

Emily Gottry (clarinet), Eric Unterkofler (piano), Emily Drennan (bass), and Robert Grahmann (drums) have all been part of the CPA jazz ensemble throughout high school, and both Emilys started even before that. After that first debut performance, the quartet went on to play multiple gigs, including across the street at Sozo Coffehouse, a daddy/daughter date night event on campus for Archway Chandler, and recently several corporate/private events in Phoenix. In each case, audiences have asked if they have a CD for sale; soon, they will! 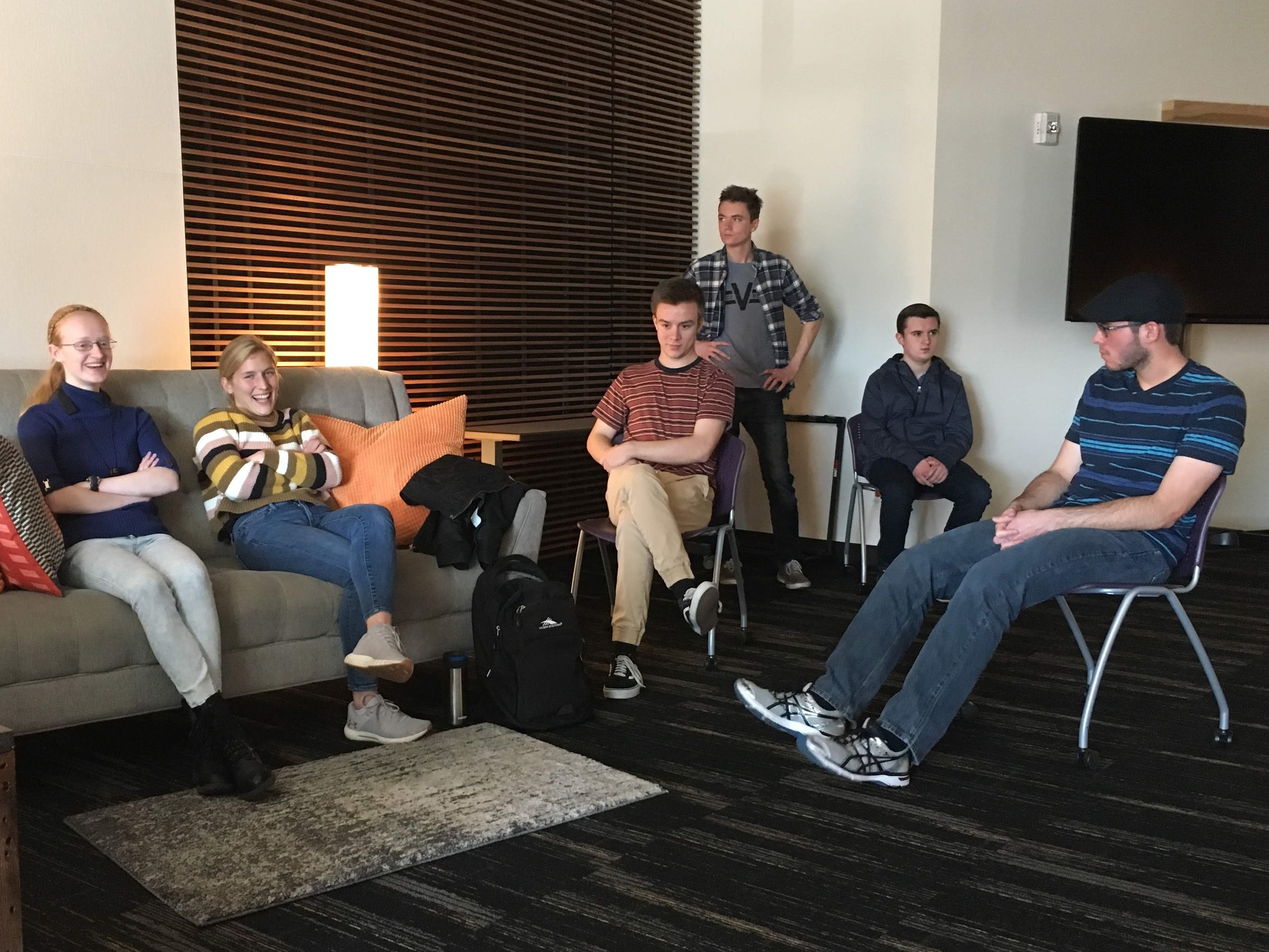 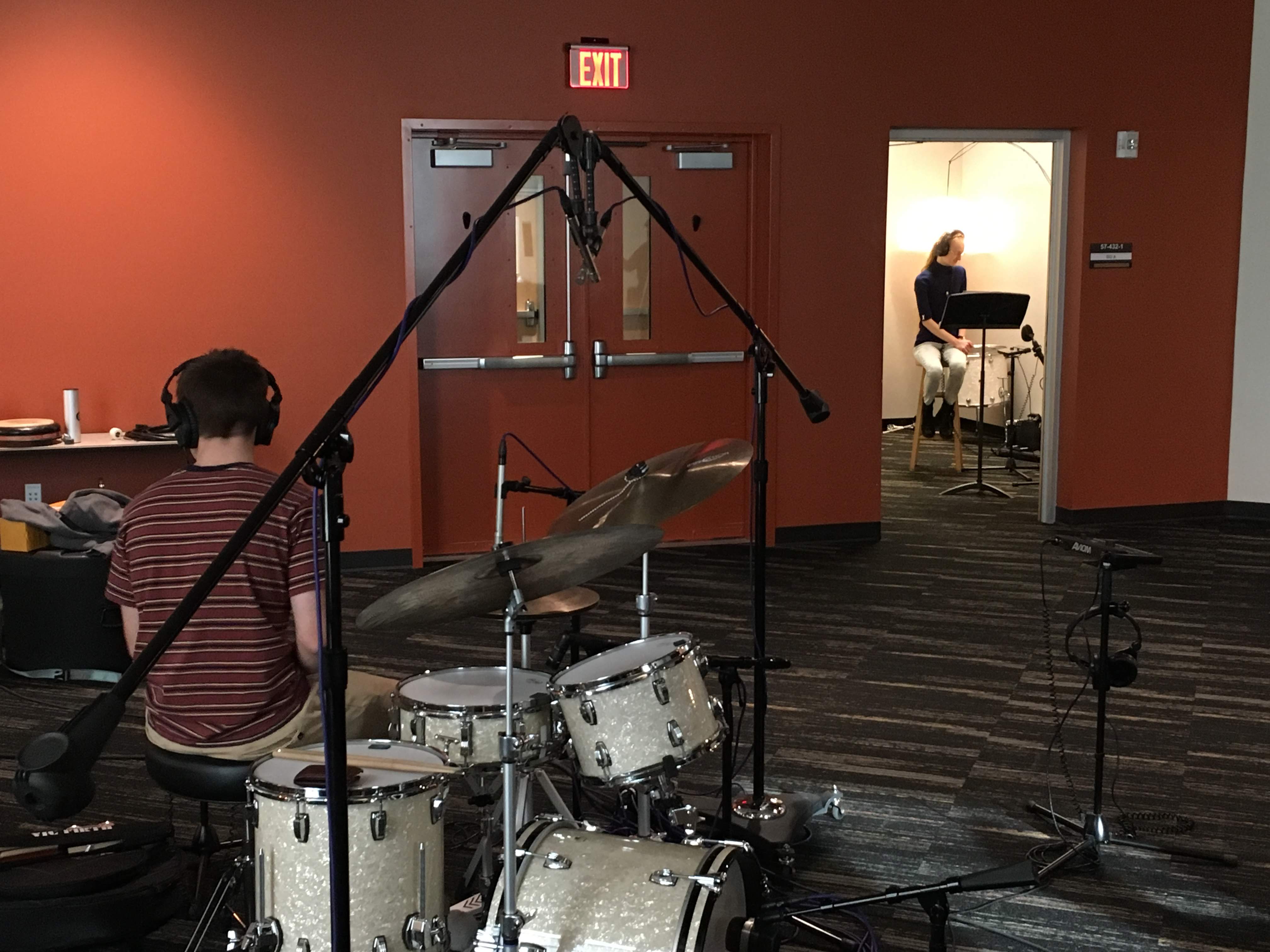 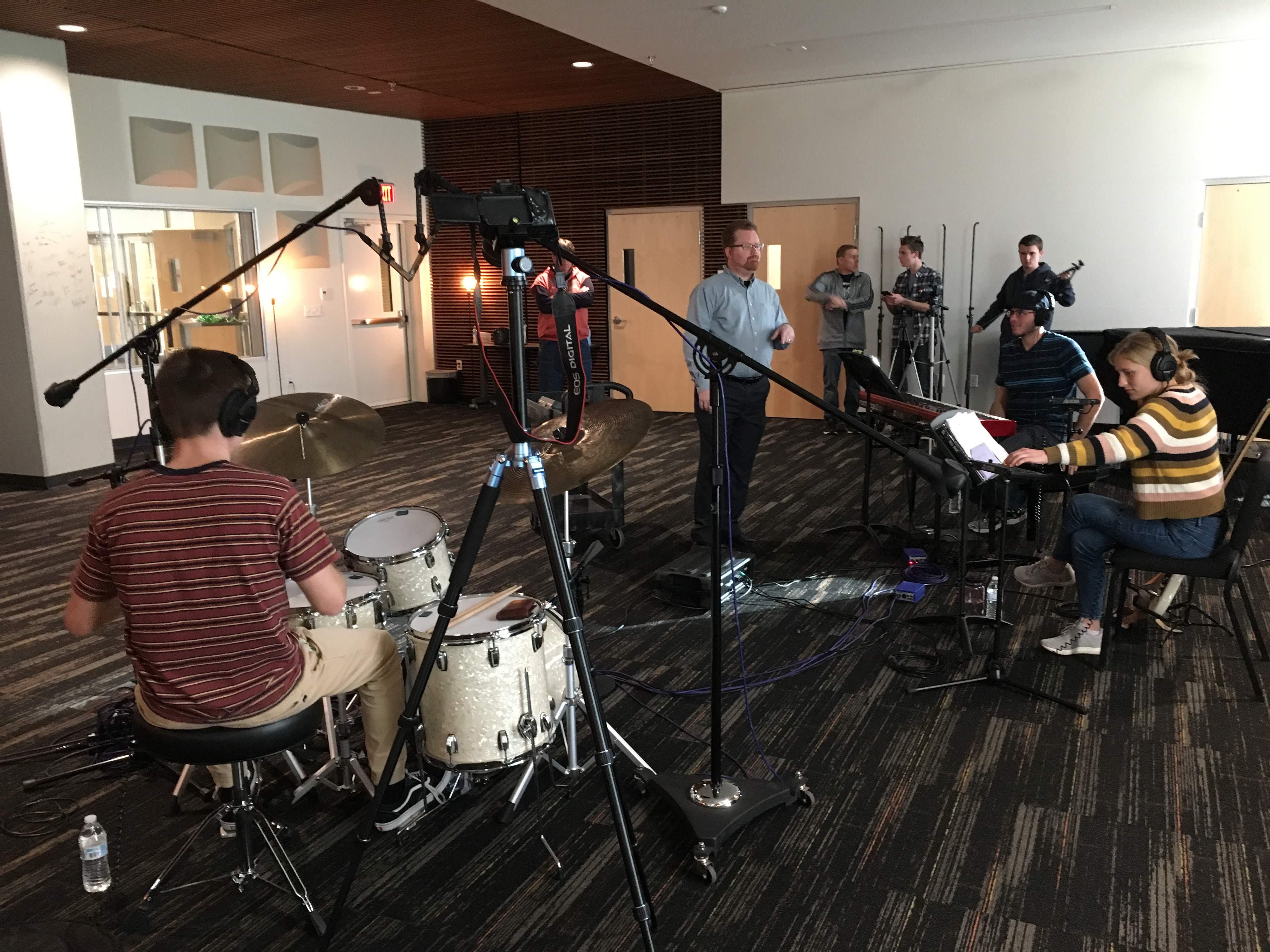 Along with college applications, work on senior theses, and practices for their respective varsity sports team at CPA (yes, every member of the quartet also plays at least one varsity sport), winter break was a time to squeeze in a few extra rehearsals to prepare for their January 3rd session. The average pop single now requires approximately 20 hours of studio time, so the six hours reserved for them on that day would have to be used in an exceptionally efficient manner if they were to get enough tracks to fill an album.

The band carpooled from the East Valley to GCU and started to set up in the studio at 9:00 that morning, ready with up to 14 potential tunes, all of which they had played at their New Year’s Eve gig at Sozo earlier that week. Along with parents and a couple fellow students taking video of the session, there was one more familiar face in the room. CPA parent, John McJunkin, a veteran engineer and producer and Recording Studio Coordinator at GCU, was the engineer for their session. As each student familiarized themselves with their Aviom personal monitor and headphones, Eric experimented with the sounds on the Nord keyboard, and Emily Gottry got herself situated in her isolated sound booth, Mr. McJunkin and Studio Manager Eric Johnson started setting up microphones. 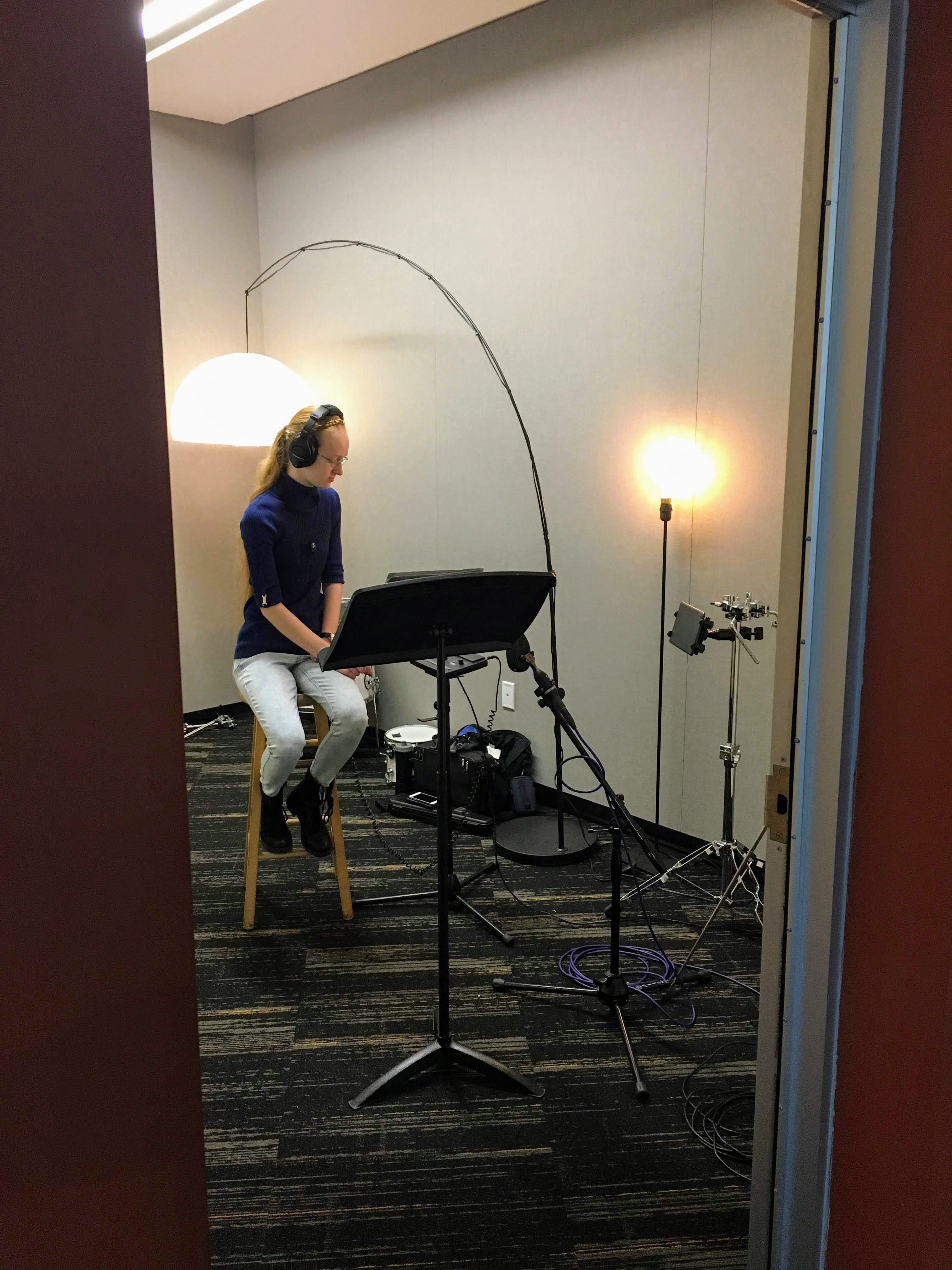 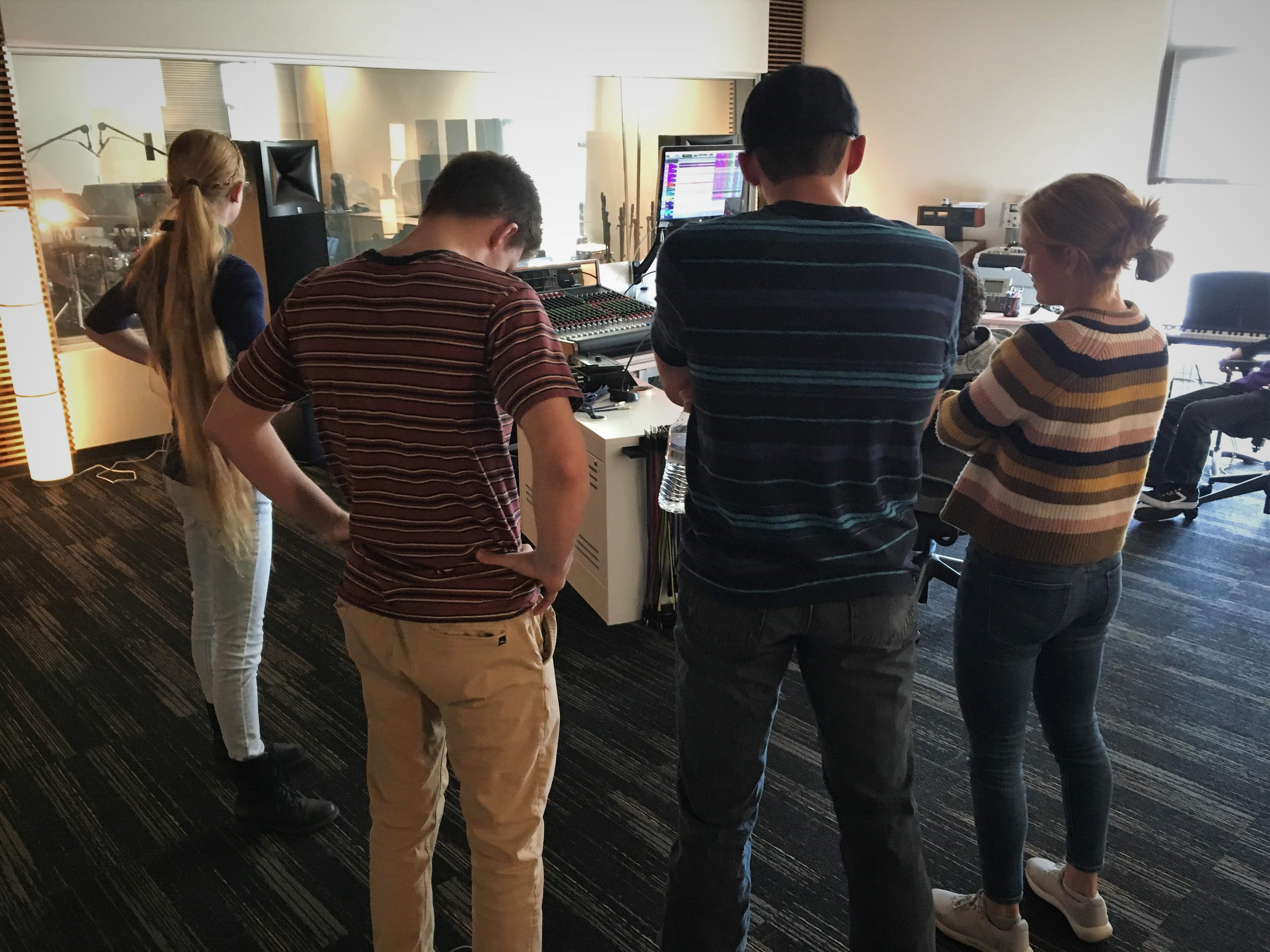 Inspired by the Dave Brubeck Quartet’s historic album Time Out, many of the tunes prepared for this session were in odd time signatures. They started their morning by recording “Skip Step” by Nate Smith, set in 17/8, followed that up with a more standard “April in Paris” in 4/4, recorded “West of the West” by Christian Scott aTunde Adjuah set in 7/4 time, and wrapped up the morning in 5/4 with “Take Five” by Paul Desmond (saxophonist for Dave Brubeck), which is also the first tune ever learned by the Take 19 quartet.

After a brief lunch break on campus, the quartet got back to work and managed to record nine more tunes in the final three hours of the session, many in just a single take. Midway through the afternoon, studio manager Eric Johnson asked if they would be playing “The Girl from Ipanema,” a famous bossa nova by Antonio Carlos Jobim and the most recorded jazz tune of all time. In the last 30 minutes of the session, the quartet obliged and had Mr. Johnson and Mr. McJunkin listing potential gig venues for the quartet to line up in the coming months before graduation. 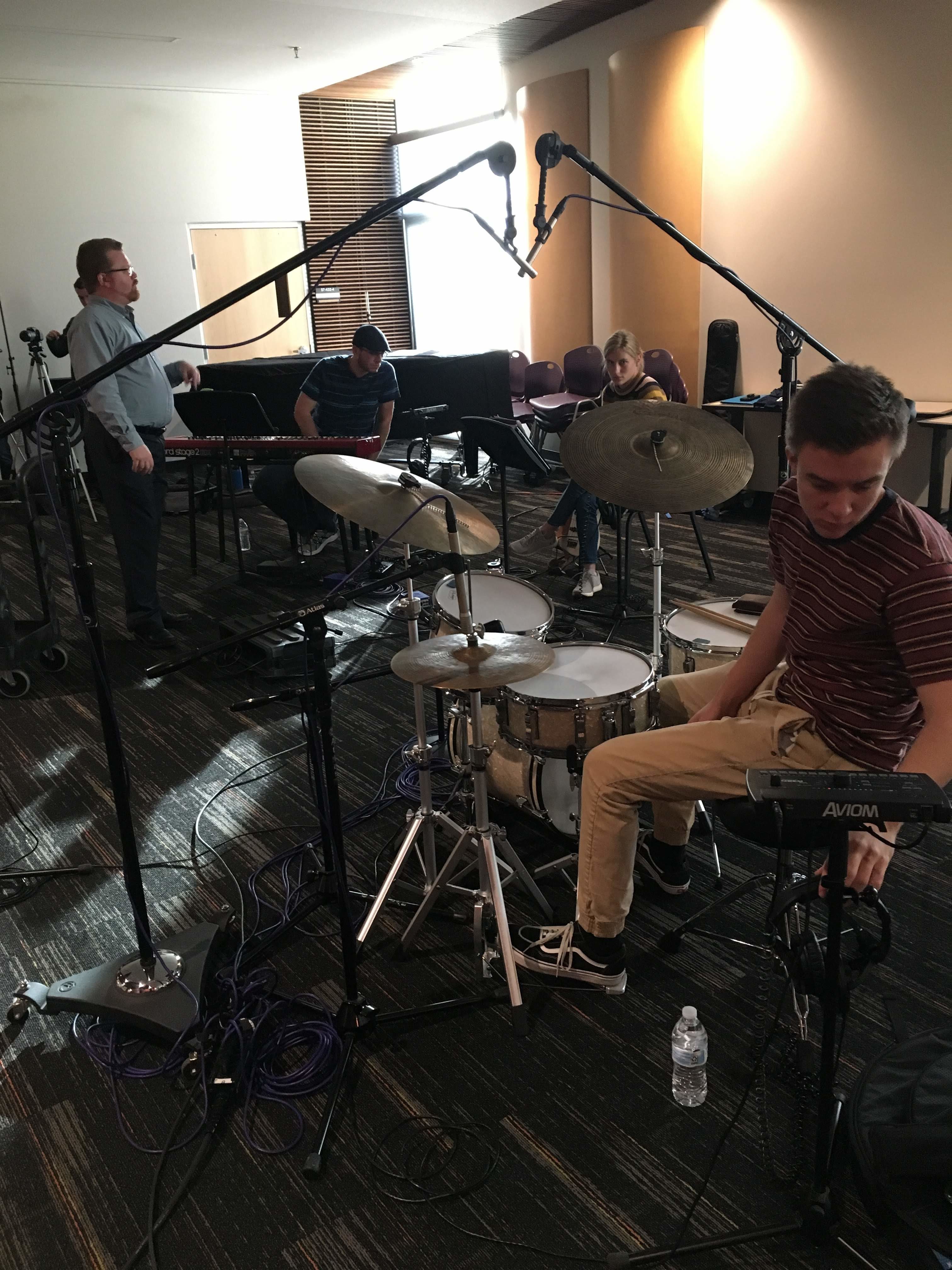 In the meantime, it is back to the spring semester of their senior year, back to edits on senior theses, anticipation of college acceptance letters, and next Sunday’s regularly scheduled rehearsal. The album is scheduled to release shortly; to add your name to the list for information when it is available, please email the quartet at Take19Quartet@gmail.com.

Mr. Josh Gottry is his fifth year as the jazz ensemble director for Chandler Preparatory Academy, an ensemble launched by veteran CPA music teacher Mrs. Amy Gottry in the school’s first year. In addition to his direction of the CPA jazz ensemble and work with CPA percussionists, Mr. Gottry serves as an adjunct faculty member at Arizona State University and Chandler-Gilbert Community College, works with music ensembles and students as a clinician and within his private lesson studio, is an in-demand percussionist throughout the Phoenix area, and is an internationally recognized composer.