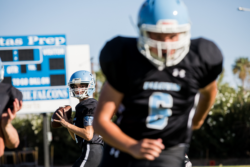 A classical education conjures images of students in uniform, classical literature, and poetry recitations.  It doesn’t often summon images of a basketball court or football field with bleachers full of cheering fans.  But is it an accurate dichotomy that these two opposing settings are disconnected?  Is there space in Great Hearts culture for the pursuit of virtue and the pursuit to win?

Great Hearts Academies Co-Founder, Dr. Daniel Scoggin believes that the pursuit of virtue is the pursuit of excellence.  It is a young person flourishing and reaching their highest protentional.  In a classical sense, the scholar will experience this pursuit through wisdom in a classroom.  But Dr. Scoggin adds, “It is completed for many young men and women on the court, on the football field, on that long run through the community, and through competition.  Competition is a wonderful crucible where we seek human excellence.  I know as an athlete, including being a college basketball player, that I learned so many lessons about my own heart, my own courage, overcoming fear, overcoming pain and challenge, and pushing through to achieve my best self.  I have learned how to be a friend and a teammate to my colleagues on the court by learning how to push through together and achieve excellence as a team.”

Great Hearts is committed to athletic rigor that is equal to the commitment to academic rigor.  Athletics is a not only an integral part of a classical education, it a crucial part.  The content that is studied and the way in which our scholars conduct themselves in this intentional culture is lifechanging.  This culture created in the classrooms carries over to the Great Hearts gyms.

Great Hearts achieves this crossover with a unique and distinctive approach to athletics. “We train our coaches to be transformational coaches instead of transactional coaches…to see every single athlete who’s in front of them as someone who deserves to be developed,” explained Justin McGee, Great Hearts ArlingtonAthletic Director. “While we strive to win, we will do it with dignity, with virtue, and deep respect for those with whom we compete.”

With such an emphasis on virtue and character, one would believe that the pursuit of winning would be secondary.  But, if excellence is always doing your best, then there is no need to separate winning from virtue if both are pursued in good measure.  It is integrous to pursue the win if the athlete remains a virtuous person along the way.  We want our athletes to be competitive.  Competition is a vehicle to draw out the best of themselves and the best out of their opponents.

At its core, athletics is the building of community through something good.  Dr. Scoggin concludes, “Athletes learn how to be great hearted through competition.  It’s a big part of completing a Great Hearts education.