Art Teacher Reaches for the Stars 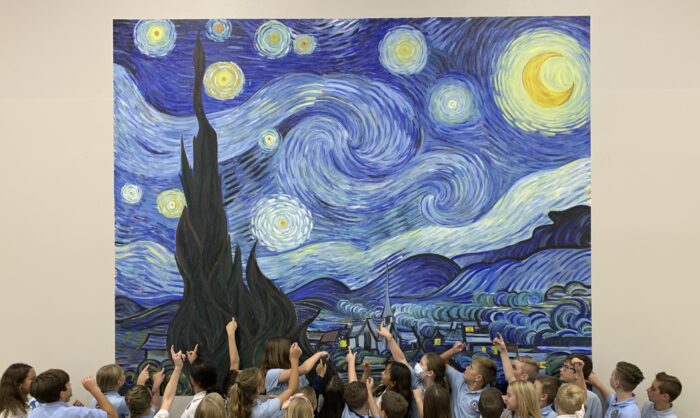 A new mural depicting “The Starry Night” can now be found in the multipurpose room at the Great Hearts Glendale Campus.  The mural was hand painted by Glendale Prep art teacher Maureen Mure.  It is roughly 4 times the size as the original, which was an oil-on-canvas painting by the Dutch Post-Impressionist painter, Vincent Van Gogh, in 1889. 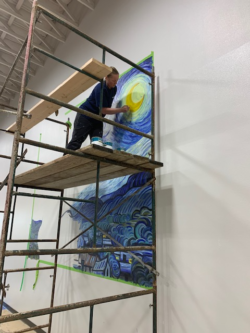 Mure said she used the age-old grid technique to recreate the masterpiece.  She took a printed copy of the original and drew one-inch grids over the top of it.  Then she transferred the same grid to the wall, but this time with one-foot grids, and replicated each box.  The basic shapes were roughed in with pencil sketches and then the given the finishing touch with acrylic paint, with carefully mixed colors to match the original as closely as possible.  The process took Mure several days of tedious work, climbing up and down scaffolding.  But the hard work paid off with an impressive replica that is appreciated by our scholars throughout the school day.

“I believe it is important for our academies to have murals of this size and nature for a multitude of reasons,” said Mure.  “We want to continue to showcase masterwork that is beautiful and timeless.  I think it is important to have numerous pieces of various subjects created in different styles and periods around the academy.  Pieces from our curriculum that our students can observe and appreciate.” 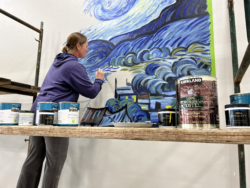 Fine art is an integral part of the classical education taught at Great Hearts.  The importance of the arts in education have been emphasized throughout the ages, beginning with Plato.  The fine arts are what make us most complete and flourishing as human beings.  Repetitive and intentional exposure is necessary to encourage engagement and exploration of music, theatre, and visual arts.  For this reason, our academy halls feel like museums with galleries of visual art created by some of the great artists of the Western Tradition.