Art Inspired by His Dream

A winning art piece for Arizona State University’s 2023 Dr. Martin Luther King, Jr. Student Contest was submitted by a Great Hearts scholar. Yooni Choi is a 6th grader at Chandler Preparatory Academy, and she is excited to have her art place 3rd for middle school entries.

The objective of the K-12 Student Poster Contest was to capture Dr. King’s legacy in art. ASU will host its 38th annual Dr. Martin Luther King, Jr. celebration on January 19, 2023 and a highlight of the celebration is the recognition and awards ceremony for Arizona K-12 students who are winners of the statewide essay and poster contests. Yooni’s winning artwork will be transformed into bookmarks that all guests will receive at the celebration.

This remarkable 11-year-old says she is into both music and art and loves to draw cartoons and play her violin in her spare time.  This is not the first time Yooni’s achievements have been honored. She was recognized on air during KBACH’s Classical Next Initiative, as a young classical musician.  And another piece of Yooni’s artwork was selected for the cover of her school’s yearbook last year. 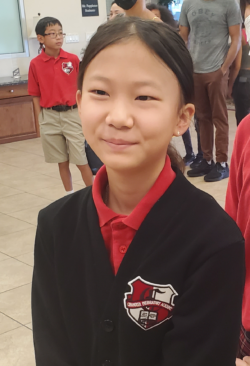 “I really like drawing and sharing my work with others to express my emotions and feelings. I think a piece of drawing or literature is more powerful than thousands of words.” Yooni appreciates the feedback and advice she gains from sharing her work, so to improve on her skillset, she said she tries to enter a variety of drawing contests.

Yooni moved to the United States from South Korea just 4 years ago and told us she didn’t know a lot about Dr. Martin Luther King, Jr. For the contest she was asked to combine the image of Martin Luther King with the subject of leadership, a task that Yooni initially found to be difficult. “After I looked it up and learned more about his life, I realized that he was the spiritual leader of not only human rights activists, but also all people who want to abolish racial discrimination and pursue love and peace,” she said. “So, I thought that he must’ve tried to listen to and understand a variety of people’s words.”  This is where she derived the idea of people from many parts of the world speaking to the image of Dr. King in their native languages with the heading, “A Good Leader is the Reader of Minds.”

“I think he is one of the greatest people in the history of the United States. I was really impressed by his speech, ‘I Have a Dream,’ and it’s like he convinced me of my dream. I want to become a therapist.” Yooni recounted some of the difficulty she had being new to our country as an elementary student. She desires to help people who are having a hard time the way she was helped by her new friends and school staff.

This incredibly eloquent and well-spoken young person learned something new through her journey of creating this artwork and through her research and learning more about the man behind the historic icon, she became inspired by him and his message. This story is just another example of the amazing scholars we have at our academies.  Yooni’s creative spirit and inquisitive heart will only continue to flourish in her continued pursuit of Truth, Goodness, and Beauty.  May we all take time to be inspired by the legacy and message of Dr. Martin Luther King, Jr., like Yooni did, as our nation comes together to celebrate his observed birthday.