Amor Vincit Omnia: The Growing Popularity of Latin and Greek 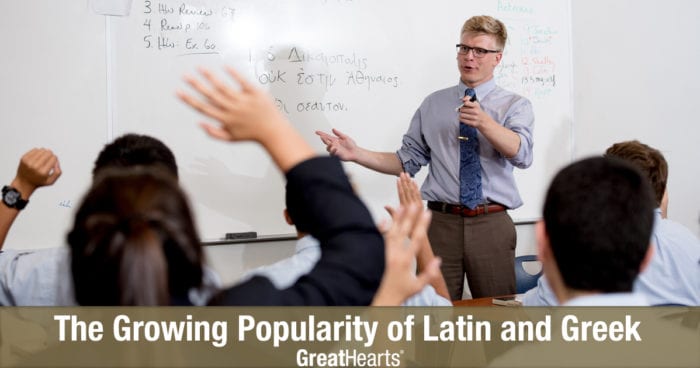 The language may be dead, but Latin is alive and well in schools around the country.

In an article published in the June 8th, 2017 issue of the Wall Street Journal, Nina Sovich wrote, “Latin and Ancient Greek, once the purview of elite private and Catholic schools, are showing up in public school classrooms across the country.”

“The study of Latin and Greek has been the backbone of higher learning in Western civilization for literally thousands of years, and modern research has confirmed what our forebears knew through experience: classical languages are a clear pathway to both intellectual development and the love of language and literature,” said Andrew Ellison, Great Hearts Vice President of Upper Schools.

Learning Latin is beneficial because it promotes mental organization and analytic skills. “Since students must apply these skills in the context of reading great Latin literature, a kind of bridge is formed between logical thinking and humane understanding. The great contribution of Latin is that, unlike math or literature taken by themselves, it shows how clear and rigorous thought can improve our understanding of life, love, death, human nature, and beauty,” said Landon Oakes, a Latin and Greek teacher at Glendale Prep. “We should learn Latin in order to read it, and only when reading may we reap the benefit of the hard work of memorization. This is why the study of Latin, if it is to happen at all, should begin early and carry on for at least several years.”

Sovich speculates shifting cultural tastes is the reason for the revival, stating, “Percy Jackson and Harry Potter have made Greek myths and Latinate spells cool. Spoken Latin, once a rarity outside the Vatican, has become all the rage. Students can geek out in Certamen contests, which are fast-paced jeopardy-like competitions about ancient civilizations.”

Latin has been a part of the Great Hearts curriculum since the inception of our charter school network in 2003. Scholars will study the language for five years, beginning in 4th grade. Once they reach high school (9th grade), they have the option to continue with Advanced Latin, or they can choose to study a modern language, like Spanish, French, or German. Juniors and seniors can top off their education at Great Hearts with two years of Classic Greek (which isn’t even offered at all colleges) if they choose to do so.

As for learning Greek, there are a number of benefits: the beauty and intrigue of a different alphabet, comparing its grammar and syntax to that of English and Latin, the opportunity to learn vocabulary that will be useful in their future medical, philosophical, or scientific studies.

“I think the most important reason is that [the students] will be able to read many of the books that they have read in their literature courses, but now in their original language. In Greek we read Plato, Homer, and the New Testament, among others. Students know from their Latin studies that to understand a work fully, we must read it in the original language; they are excited by this opportunity. As am I,” added Oakes.

Ellison added that even though Latin and Greek has receded in the last century, it has been staging a comeback in the last few decades. “Great Hearts is proud to fly the classical flag and march at the head of this movement.”