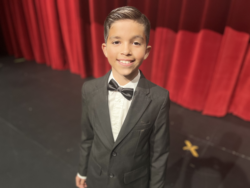 5th grader Isaac Mendez was named the 2022 Great Hearts Arizona Bard last April.  At the time, Isaac had just entered his first year at Great Hearts Archway Trivium East (now  Great Hearts Roosevelt in Buckeye).  His winning recitation of Art vs. Trade by James Weldon Johnson was delivered with clarity and a maturity beyond his physical age.

According to the Merriam-Webster Dictionary, a bard is defined as “a tribal poet-singer skilled in composing and reciting verses on heroes and their deeds.”  The Annual Bard Competition is a Great Hearts tradition and a celebration of poetry where scholars are selected from each local archway to compete in the region-wide championship.

“All of our students, from kindergarten through 5th grade, constantly have a poem they are working on.”  Archway Trivium Headmaster and the evening’s Master of Ceremony, Clay Scott, explained to the audience, “They are memorizing one after another all the way through.  We have another phrase that we use when we talk about memorization. We say that a child has learned it by heart.  What we are going to witness tonight are students who have not only learned it in their head, but they have also learned it by heart.  They’ve taken it into their soul, and they will be able to carry that with them.”

Isaac could barely contain his excitement on stage when he was announced as the Great Hearts Bard.  His family said they were all very familiar with the piece he performed as he practiced for hours each day for months.  His mother told us that even his sister Emma, a kindergartener at the time, could recognize when he recited the wrong word and would coach him on how to emote certain phrases.  His parents, Javier Mendez and Deisy Enriquez attribute both of their children’s love for poetry to the inclusion of the fine arts in the curriculum at Great Hearts. While Isaac has always been bright, they believe his exposure to the arts have unlocked his passion for poetry and performing.

Isaac said that memorizing the poem was the easy part for him.  The challenge was really understanding the tone of the poem and grasping the emotion behind the words.  He enlisted the help of the Trivium Preparatory drama teacher for guidance with his delivery and comprehension of the material.  He articulated how much the meaning of a poem can change from just a minor adjustment to his inflection of a word or line.

His sister, who shares his love for poetry, was moved to tears as she talked about his win.  “I am so proud of my brother.”  Emma looks forward to following in his footsteps and competing in the Bard Competition as well.

The Bard Competition is open to students at each Archway academy in grades 3-5.